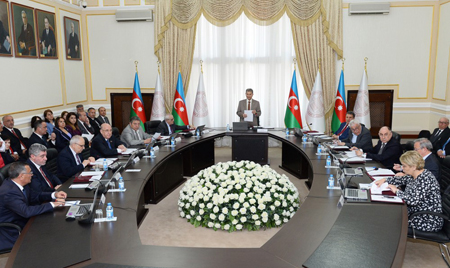 "One of the main areas of a science policy implemented by the Azerbaijan National Academy of Sciences is a dynamic development of the international scientific relations and the study of the scientific achievements of the world”, said President of ANAS, Academician Akif Alizadeh at the today’s meeting of the Presidium of ANAS. Having said that the ongoing reforms in the country in education, have led to significant results in the undergraduate and graduate level, the academician added that for the full integration into the international scientific community there is a need for reform in the field of academic degrees. He noted that to this end, starting in December 2015 under the Programme of the European Commission's Erasmus + was launched project "Reconstruction and development of education at the doctoral level in Azerbaijan in accordance with the requirements of the European Higher Education - Nizami". The main coordinator of the project is the University of Montpellier (France).

Academician Akif Alizadeh added that the project provides for the development of a new model to bring doctoral studies in ANAS and higher educational institutions in line with international standards, which in turn makes it expedient to hold in ANAS reforms in this area.

At a meeting of the scientific institutions of the Academy was asked to prepare proposals to improve doctoral education in Azerbaijan. Also, it was decided to establish a working group to ANAS on current activities, collection and systematization of the proposals. In addition, the relevant departments of the Presidium have been instructed to carry out measures for the implementation of international commitments and targets, as well as inform the public about the project and its popularization.

©All rights are reserved. Citing to www.science.gov.az is necessary upon using news.